With the moss rock planters complete and 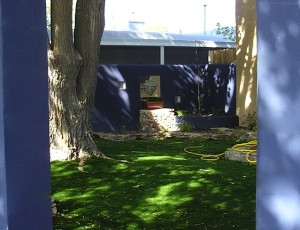 fountains finished up, the next phase was ready to begin. The original plan called for crusher fines inside the courtyard as the homeowners really wanted an open space that would allow for different seating areas. As the project progressed, they noticed some weeds sprouting up in the area that the crusher fines were called for. They found they liked the effect of the greenery (if not the weeds themselves!), and began to question the crusher fines. We knew that lawn was out of the question due to the dense shade and other ground covers would have a hard time with the aggressive tree roots. We ended up changing the plan to add synthetic grass, which really satisfied all my clients desires. They had the green, lush effect that they desired, year round, with very low maintenance (just blow leaves off) and no water. Plus it functioned as the crusher fine would have in allowing for multiple seating areas and the associated foot traffic. An added bonus was the fact that the green really brought out the blue walls. 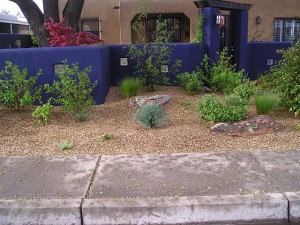 Next up, plantings were installed outside the wall. This area was designed to be low maintenance for the clients and yet visually pleasing for the neighbors. Shade plantings really don’t offer up much in the way of flowers, so that was accepted early on, but beyond the pleasant green of the leaves the plantings can offer up some nice fall colors of yellow, orange and red which really stand out against the dark color of the wall. The plantings will be a bit of trial and error due to the strong tree roots. Some of the more successful so far have been autumn sage, golden columbine and dwarf plumbago.