Due the size and aggressive root system 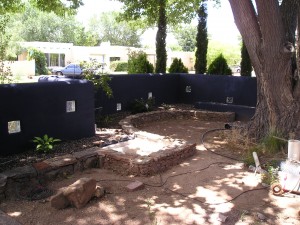 of the existing tree, I decided to add several raised planters in the interior of the courtyard. The varying heights add interest to the overall design but the main consideration was giving the new plants a fighting chance before the tree roots invade.

Several materials were considered for the planters but moss rock was the final choice, as the color ties together both the stucco on the house and the exposed aggregate walk. It also adds a pleasant texture up against the smooth, sand finish blue stucco walls. One consideration that most people don’t think about when it comes to rock, the rock needs to be scaled appropriately for the height of the planter. Here we stacked smaller stones that really give the planters more detail, large rocks may be ok on a taller, more substantial planter but in this case they would simply overwhelm. 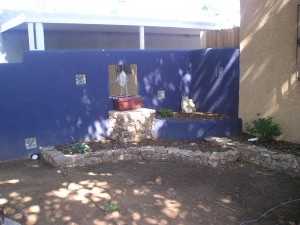 There are going to be two water features in this courtyard, one a wall fountain, and the other a decorative pot that spills water over the top into a hidden basin below. You can see them here in beginning stages, as they both tie into the new planters. A concrete basin was poured for the pot fountain and then rebar was used to make a platform for the metal screening that the pot sits on. Further, a moss rock pedestal was incorporated into the varying planters at the other end of the yard. The wall fountain will spill its water into a terra cotta pot and the pump and true basin are hidden within the 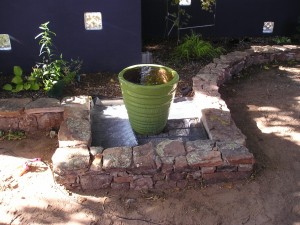