The first step in the project was to remove the

existing, dated walk. It was too narrow, too close to the house and generally unattractive. Since the homeowners prefer a more contemporary style, we chose to honor that by creating a new walkway that is made up of individually poured concrete rectangles that are offset from each other, allowing future greenery or gravel to flow between them.

The new walkway also continues down to the sidewalk rather than just to the driveway. This ties the walk to the yard a bit more, and is more convenient and appealing for guests that park on the street. We decided to go with a gray 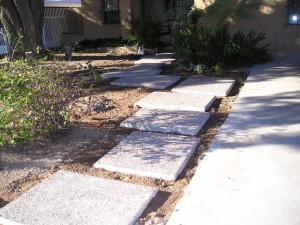 exposed aggregate finish for the concrete, as the color and texture will tie in nicely with the slate tile that the homeowners would like to use at their entry.