Learning A Few New Tricks Treats You, Your Dog To A Welcoming Yard

If you could see your yard through the eyes of your dog, would your tail be wagging? Is the yard visually pleasing? Is it an inviting physical space for playing and relaxing?

That canine perspective is important for people contemplating a new or revised landscape design, says Amy Steidlmayer, a landscape architect with Red Twig Studio in Albuquerque.

“If you have a dog, then you’re probably an animal lover and you want your pet to get as much enjoyment from the yard as you do,” she says. “The lives of most dogs revolve around the home — outside as well as inside.” Consequently, the quality of a pet’s life can be enhanced “if the outdoor environment provides a place to run and relax, shade from the sun, warmth from the cold and different textures and smells for them to explore and keep them interested.”

Steidlmayer estimates that 75 percent of her clients are dog owners and most of them “want some kind of accommodation” for their pooches, particularly a patch of lawn, a dog run, plant material that stands up to trampling, and walls, fences and gates to keep their animals safe and secure.
However, Pat Gay, a landscape architect with Sites Southwest, offers a different perspective, noting that “it’s easier to maintain a landscape in a more pristine condition if you can keep the pet area separate from the people area.”

Dogs like to run and dig and are particularly fond of softer surfaces. “And they must have a constant source of water, or they will dig up your irrigation,” Gay says.

Dogs learn to stay away from cacti and yucca plants, which are not exactly dog-friendly by Steidlmayer’s definition, but certainly hardy. Woody plants like chamisa and Apache plume will hold up well in the presence of an active animal, he says. 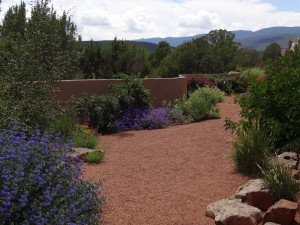 are easy on their paws and easy to clean from dog waste. Ornamental grasses such as blue grama, buffalo grass, side oats grama and Indian rice grass, are extremely hardy and “dogs like to lie down in them and sleep.”

Dogs are also quite fond of flower and vegetable beds, Gay warns. “They’re attracted to potting soil and manure and moist earth, so if you have a raised planter or one that’s fenced off, it might have a chance, but beds that are open and at ground level will likely get torn up.”

Here are some things to consider when looking to create a dog-friendly landscape, and which are easy enough to modify to accommodate the level of yard interaction you want with an active animal:

ACCESS: Steidlmayer recommends that a doggie door be installed to allow a pet to come and go as it pleases between its indoor and outdoor environments, especially important if food and water are kept solely in one place or the other. “This gives the dog, as well as the dog owner, more freedom,” she says.

DOG HOUSE: If installation of a doggie door is not possible and the pet has to be outside for hours at a time, then a dog house of some sort ought to be available, Steidlmayer says. “Pets need protection from rain, snow, heat, cold or wind, and the dog shelter should be sturdy and stable. A dog house with nice design elements can even serve as a visual focal point in the yard.”

PERIMETER SECURITY: The yard should be contained by walls, fences and gates that are high enough to prevent the pet from jumping over, sunk deep enough to discourage tunneling, and, if necessary, to separate the pet from “people only” spaces. Walls and fences can be planted with appropriate vines and plant material for added color, texture and interest. Plants such as honeysuckle, trumpet vine and climbing roses, like Lady Banks, can work well. These can be dug in on the opposite side of the wall and allowed to climb and hang over as they grow.

Be aware, Steidlmayer says, that dogs can

be territorial, and most are attracted to sounds, odors or things they see on the other side of the wall or fence. Dogs will run back and forth along the barrier or jump up on it as they explore, so it’s advisable to leave space along the barrier for the animal to run, and avoid small plantings that will get trampled and likely not survive.

DOG RUN: Ideally, a dog run is an area large enough for the dog to actually run and play, Steidlmayer says. Dogs also tend to use the area, or specific portions of it, as their bathroom. That means the groundcover of the dog run should be a material that is easy on a dog’s paws and easy for the pet owner to clean.

Among the better choices are crusher fine, three-eighth inch rounded pea gravel or cedar chips. Expect to refresh the groundcover by adding new material regularly to compensate for the loss of fecal-contaminated material that gets shoveled into the trash during cleanup.

Landscape weed fabric need not be used as a liner beneath the groundcover of the dog run. Larger, more active dogs can inadvertently pull it to the surface while running and playing, she says. Further, a weed barrier is unnecessary because groundcover that is layered at least three inches thick is enough to impede most weed growth.

Homeowners often create a dog run on the side of the home, usually a fenced off rectangular space not fully visible from the front or back yards. Steidlmayer, however, frequently incorporates the dog run into the overall design of the yard and tries to vary the shape for a more pleasing visual aesthetic.

“Dog runs can be interesting. They don’t have to be hidden or tucked out of sight,” she says. Neither do they have to be physically separated by fences, she notes. Delineating the space can be accomplished by screening with shrubs such as photinia, curl leaf mountain mahogany, Spanish broom or bamboo.

GRASS: Many people want their pet-friendly
landscapes to include a grassy area for lounging, playing or just greening-up the yard. Animals love grassy areas, too, especially in the heat of the summer when the grass is cool to lie on and is shaded by overhead branches. Grassy areas are soft on their paws and perfect for chasing a ball.

Unless otherwise trained, dogs will also use the area when nature calls. Grass can be difficult to grow and maintain in New Mexico, especially when assaulted by dog urine and feces. Hardier native and water-wise grasses like fescue and park blends tend to fare better, Steidlmayer says. Fecal matter must be picked up daily and the grass, especially in the areas where the pet relieves itself, should be hosed off to dilute contaminants and flush them below the root zone.

An alternative to grass is artificial turf. “It’s awesome,” she says. Cleaning it is just a matter of removing solid waste and hosing down the surface. Artificial turf always looks well groomed and never develops yellow spots from urine or insects. “It is expensive, and because it’s a plastic-based product it can heat up in the sun, making shade more important in that area.”

can be created with a meandering foot path made from hardscape materials such as flagstone, pavers or poured cement, or something more malleable, like crusher fine or pebbles, Steidlmayer says.

A path can lead to a hidden sitting space obscured by vegetation, a large piece of yard art that creates shade for a pet to lie in, or to a water feature, such as a ground spurting fountain, where pet and pet owner can walk through to cool off on hot summer days.

PLANT SELECTION: Equally important to knowing which plants are the hardiest and most water wise for our environment, is knowing which plants are potentially dangerous to dogs. Obviously, Steidlmayer says, cactus and yucca plants are not dog-friendly because of their needles or spines.
Other plants are less obviously a bad choice because they may have attractive berries or greenery that may also be toxic to dogs, she says. Among them are: morning glory, nandina, oleander, yew, English Ivy, pyracantha, lily, foxglove, boxwood, rhubarb, bird of paradise, holly, azalea and tomato plants.

Appropriate plants
A dog-friendly yard should include plants that are hardy and appropriate for our specific climate and soil conditions, and can bounce back if trampled on by an excited canine. The list is extensive, but here are a handful recommended by landscape architect Amy Steidlmayer of Red Twig Studio:
Wall germander, lamb’s ear, geranium sanguineum, Jupiter’s beard, butterfly bush, Spanish or dwarf broom, dwarf plumbago, China aster, cotoneaster parneyi and ornamental grasses including maiden grass, Foerster grass and mondo grass.

READ OUR OTHER FEATURED ARTICLE IN THE ALBUQUERQUE JOURNAL